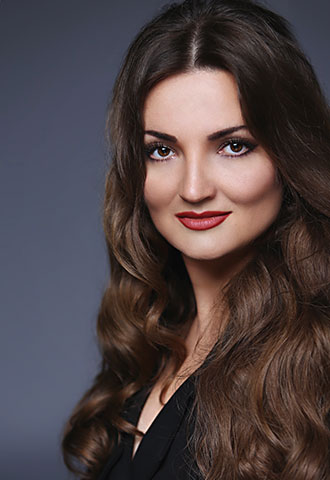 Oksana Volkova was born in Minsk. She graduated from the Belarusian State Academy of Music where she had studied vocal under Prof. Lidia Galushkina.

She joined the opera company of the Bolshoi Theatre of Belarus in 2002.

Her numerous awards and prizes include, among others, two grand prizes of the Special Fund of the President of the Republic of Belarus for Support of the Talented Youth (2008, 2010), special certificate “For Artistic Realization of the Ideas of Friendship Between the Peoples of Belarus and Russia” (2014), Best Female Role in Opera at the 4th edition of the National Theatre Prize of the Republic of Belarus for her Carmen.

In 2003 Volkova performed the roles of solo mezzo-soprano in the cantatas Moscow by Pyotr Tchaikovsky and Alexander Nevsky by Sergey Prokofiev with the Irish Symphony Orchestra conducted by Alexander Anisimov in Dublin (Ireland).

Volkova joined the Bolshoi Theatre of Russia as a guest soloist in 2011. Her roles with the theatre include the title role in Bizet’s Carmen, Lyubasha in The Tsar’s Bride by Rimsky-Korsakov, Olga in Eugene Onegin, Fenena in Nabucco by Giuseppe Verdi, Laura in The Stone Guest by Alexander Dargomyzhsky.

In 2010 she appeared in the role of Olga in Eugene Onegin during the tour of the Bolshoi Theatre in London (Royal Opera House) and Madrid (Teatro Real).

In May 2010 she sang at the Plácido Domingo International Opera Ball in Washington. She participated in concerts of the National Philharmonic Orchestra and the chamber orchestra Moscow Virtuosi conducted by Vladimir Spivakov in the cities of the CIS countries and Switzerland.

In March 2011 Volkova made her debut with the Teatro Massimo in Palermo (Italy) as Laura Adorno in La Gioconda.

She appeared in The Queen of Spades at the Mikhailovsky Theatre in St Petersburg and Carmen at the Teatro dell’Opera Giocosa in Italy in June 2011.

In September 2011 she opened the season at the Opera de Nice in France, having performed the role of Marguerite in La damnation de Faust by Hector Berlioz.

In 2012 Volkova became a guest soloist of the Latvian National Opera where she performed the role of Carmen in the production by Andrejs Žagars. She also sang the Moscow Cantata conducted by Alexander Vedernikov in Copenhagen (baritone role was performed by Sergei Leiferkus) and appeared as Santuzza in Mascagni’s Cavalleria rusticana at the Teatro di San Carlo in Naples.

In 2013 her international appearances included the title role in Bizet’s Carmen at the LNO and at the Teatro Colón in Buenos Aires, Argentina, Maddalena in Verdi’s Rigoletto and Olga in Tchaikovsky’s Eugene Onegin under the baton of Valery Gergiev at the Metropolitan Opera.

Her recent engagements include Maddalena in Rigoletto and Giulietta in Jacques Offenbach’s Les contes d'Hoffmann with the Metropolotan Opera in New York, Maddalena in Rigoletto and Preziosilla in La forza del destino by Verdi at the Israeli Opera in Tel Aviv, Giovanna Seymour in Gaetano Donizetti’s Anna Bolena and the title role in Carmen at the Estonian National Opera, Olga in Eugene Onegin at the LNO and Riga Opera Festival, Santuzza in Cavalleria rusticana at the Grand Théâtre de Genève.