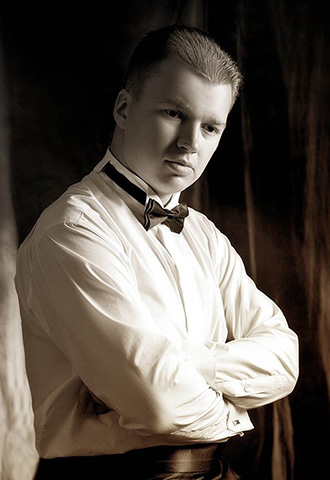 Alexander Roslavets is a finalist of the Minsk Competition and was offered an engagement with the Bolshoi Theatre of Belarus as a special prize.

A citizen of Brest, Alexander Roslavets graduated from the Nikolai Rimsky-Korsakov St Petersburg State Conservatory (class of Professor Nikolai Okhotnikov). In 2011-2014 he was a soloist of the Opera and Ballet Theatre of St Petersburg Conservatory.

In 2014, he was awarded grand prize at the Review Competition of Singers-Graduates of Music Higher Educational Institutions of Russia (St Petersburg), followed by his joining the Young Artists Opera Programme of the Bolshoi Theatre of Russia the same year.

On December 2015 he became the winner of 7th International Competition of Opera Singers "Saint-Petersburg", which is initiated by the famous singer, People's Artist of USSR Irina Bogacheva.