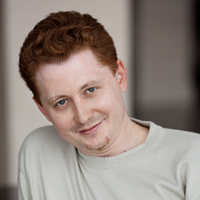 Graduated from the Dnepropetrovsk State Drama College as an artist of the musical theatre. 1995-1997 – was engaged by the Odessa theatre of musical comedy. 1997-2000 – engagement by the Ural municipal theatre of operetta (Novouralsk, Russia).
2000-2004 – engaged as a soloist by the Belarussian State musical theatre, performed the principal tenor parts.
In 2013 the Francysk Skaryna Medal was conferred on him for professionalism and significant achievements in the development of culture.
Since 2018 he has been a soloist at the Odessa National Academic Opera and Ballet Theatre.