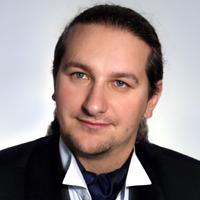 Aleksey Mikutel is a graduate of the Belarusian State Academy of Music (2009). He enrolled at the Academy in 2003 to study chorus conducting. In 2006, he transferred to the vocal department and continued his training under the People’s Artist of Belarus, Professor Pyotr Ridiger.
In 2010, he joined the opera company of the Bolshoi Theatre of Belarus.