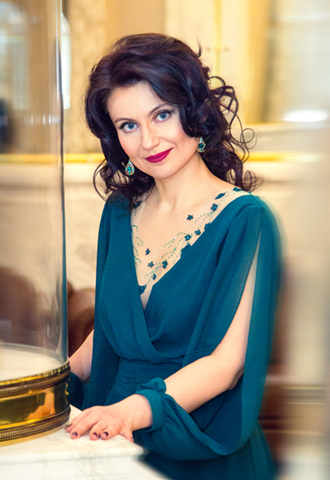 Tatyana Gavrilova graduated from the Belarusian State Academy of Music where she had majored in piano and voice (class of professor, Honored Artist of the Republic of Belarus Lyudmila Kolos).

She joined the opera company of the Bolshoi Theatre of Belarus in 2004.

In 2001, she became a laureate of the Special Fund of the President of the Republic of Belarus for Support of the Talented Youth.

Tatyana Gavrilova took part in a cycle of baroque music concerts given by the Chamber Soloists Minsk orchestra under the baton of Dmitry Zubov (Moscow), where she performed St John Passion by Johann Sebastian Bach and Stabat Mater by Giovanni Battista Pergolesi.

In 2014, she did a recital at the small hall of St Petersburg State Philharmonic. Later the same year, she appeared as Cio-Cio San in a performance of Madama Butterfly at the Estonian National Opera.

In the 2011/2012 season she performed Wolfgang Аmadeus Mozart’s Requiem with the State Symphony Orchestra of the Republic of Belarus conducted by Andrei Galanov.

With the orchestra Young Belarus, she toured Germany and participated in the Chamber Music Festival in Italy.

Since 2014 she has been on the expert artistic committee of the Special Fund of the President of the Republic of Belarus for Support of the Talented Youth.

She regularly gives concerts with the ensemble Partita in Belarus.

At the invitation of the Akhundov Azerbaijan State Academic Opera and Ballet Theatre Tatyana Gavrilova performed the role of Gilda in Rigoletto (Baku, 2017).

She worked with the orchestra "Chamber Soloists of Minsk" (conductor Dmitry Zubov) and performed the role of Elektra in the concert version of Mozart's opera Idomeneo in 2016 and the role of Anna in Haydn's oratorio The seasons in 2017.

Her recitals "French and Spanish Chamber Music" and "Letters of a Stranger" with the participation of orchestra artists took place in the chamber hall of the Bolshoi Theatre of Belarus (pianist Zhanna Varlamova).

As a member of the opera company she has been on tour in Germany.